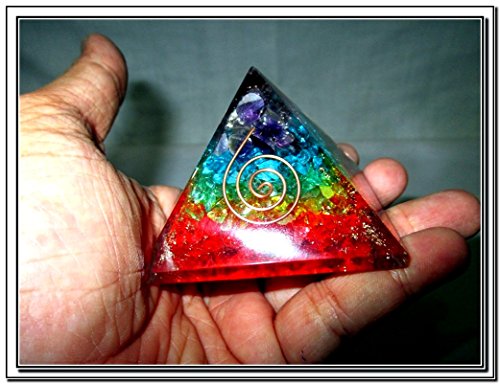 Exclusively Jet International Product. Approx. size 2.5 length * 2.5 width * 2 inch height. Fifth Element Orgone products are powerful Spiritual tools that can be used to enhance all areas of your life – physically, mentally, emotionally and spiritually. They can best be described as transmitters of Universal Light Energy, also known as Source Energy, Ether and Zero Point Energy. This higher dimensional field is the animating force behind all creation and has the capacity to automatically transform lower vibrational (negative) energy into higher vibrational (positive) energy.

By simply holding an Orgone device or being near one, negative energy will be cleared from your field creating a higher, more balanced and healthy state. Using your Intent you can also direct this Source Energy towards personal healing, protection and spiritual awakening. What this means is that you now have a practical tool that can create and maintain a positive energy field in your home and workplace for both yourself and those around you.

I personally consider Orgone to be one of the most advanced Spiritual tools available today and feel that these products would be highly beneficial for anyone.

This is a very Unique Rare New & Best Seller Item from us. It has an amazing combination of Crystal Pyramid Tetrahedrons that have inside various chakra gemstones like Lapis, Amethyst, Blue / Green / Yellow Aventurine, Red Jasper, Crystal Quartz, Moonstone, Sodalite, Yellow Jade, etc. This gives the best healing results to the user considering the metaphysical properties of all the stones’ combined effects.