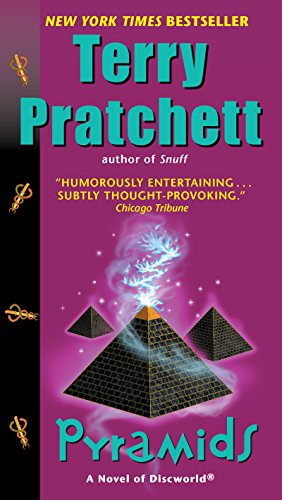 Pyramids is the seventh book in the award-winning comic fantasy Discworld series by Terry Pratchett.

In Pyramids, you’ll discover the tale of Teppic, a student at the Assassin’s Guild of Ankh-Morpok and prince of the tiny kingdom of Djelibeybi, thrust into the role of pharaoh after his father’s sudden death. It’s bad enough being new on the job, but Teppic hasn’t a clue as to what a pharaoh is supposed to do. First, there’s the monumental task of building a suitable resting place for Dad — a pyramid to end all pyramids. Then there are the myriad administrative duties, such as dealing with mad priests, sacred crocodiles, and marching mummies. And to top it all off, the adolescent pharaoh discovers deceit, betrayal—not to mention a headstrong handmaiden—at the heart of his realm.

Sometimes being a god is no fun at all…